Let me start by saying that I have a passion for technology – some might classify it as a love, others might call it techno-lust, but whatever it is, I really enjoy new gadgets, and I especially enjoy learning about what makes them tick. From a young age I’ve been pulling things apart, and I certainly hope that I’ll never have to stop.

In particular, I enjoy the challenge of broken technology – quite often it is just one tiny thing gone wrong, in a huge complex machine, that stops the entire thing working, and I enjoy the process of finding that fault (and the satisfaction of fixing it, if possible) like some would enjoy solving a crossword.

Recently, I have taken an interest in the HP Officejet Pro X series of printers. These prints are quite unusual, as rather than having a moving print head, they have a “pagewide print-bar” that is fixed in place, and spans the entire width of a page. As a result, this rather unique setup enables these printers to print at an incredible rate of up to 70 pages per minute.

Unfortunately (and not unlike other HP products) these printers are fairly lackluster when it comes to reliability, with the print-bar assembly failing frequently for a number of reasons (discussed below), often resulting in cryptic error messages on the screen, such as the “officejet blue screen of death“. This is a first-generation product, and I  hope HP has improved things with the newer white models. There is even a known manufacturing defect on some of these printers, but I forget where I read that now.

So, a fortunate result of the death of some of these engineering marvels, has been the opportunity for me to get to look inside and poke around. I’ve now personally had my hands on 5 of these printers, and have been inside three of them, having taken apart and put together around 50% of the entire printer to access the printbar assembly.

In most cases I have seen, it is the print bar that has failed in some way or another.

Anyway, the result was getting to take apart the pièce de résistance of the printer: the pagewide printbar head array: 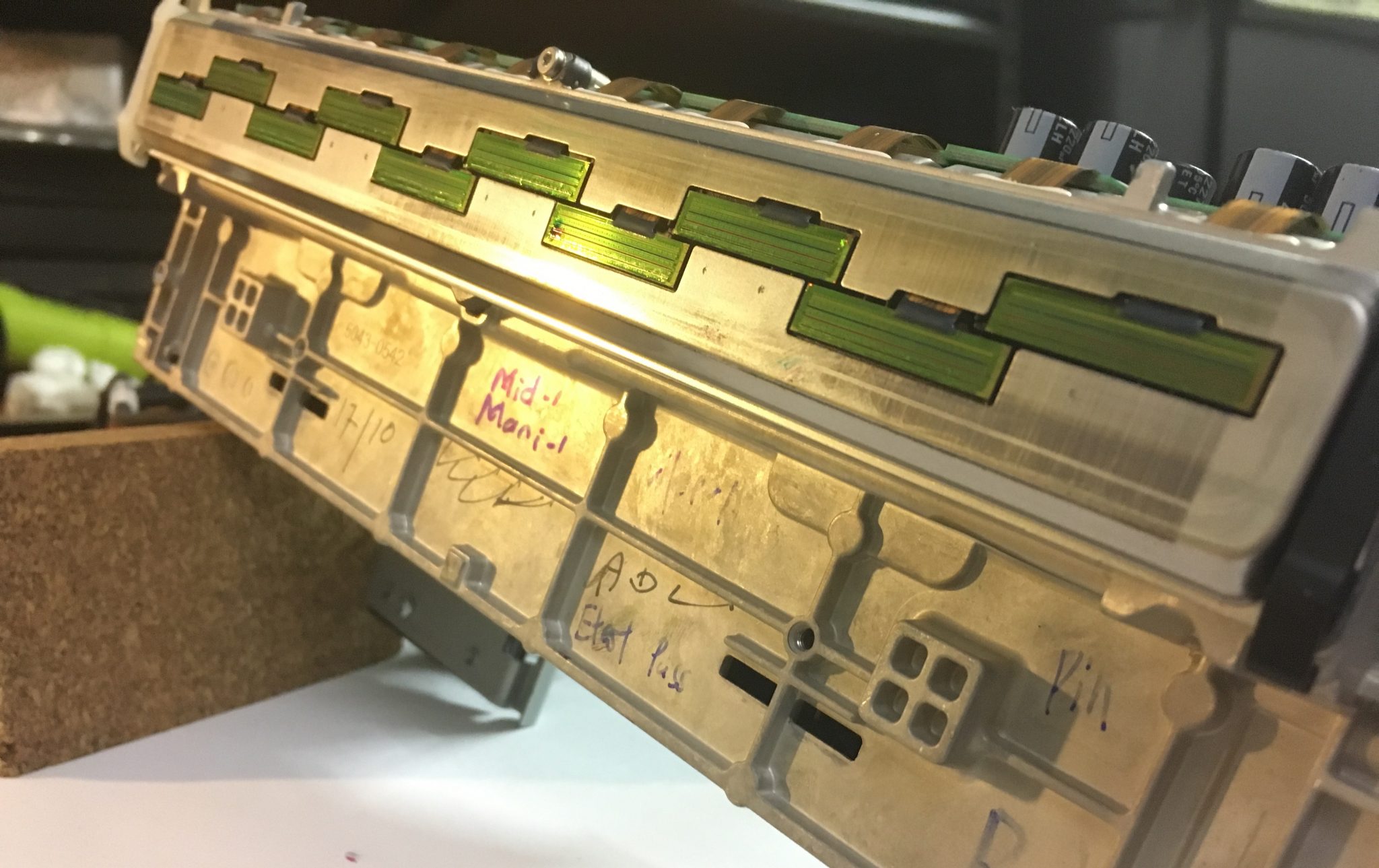 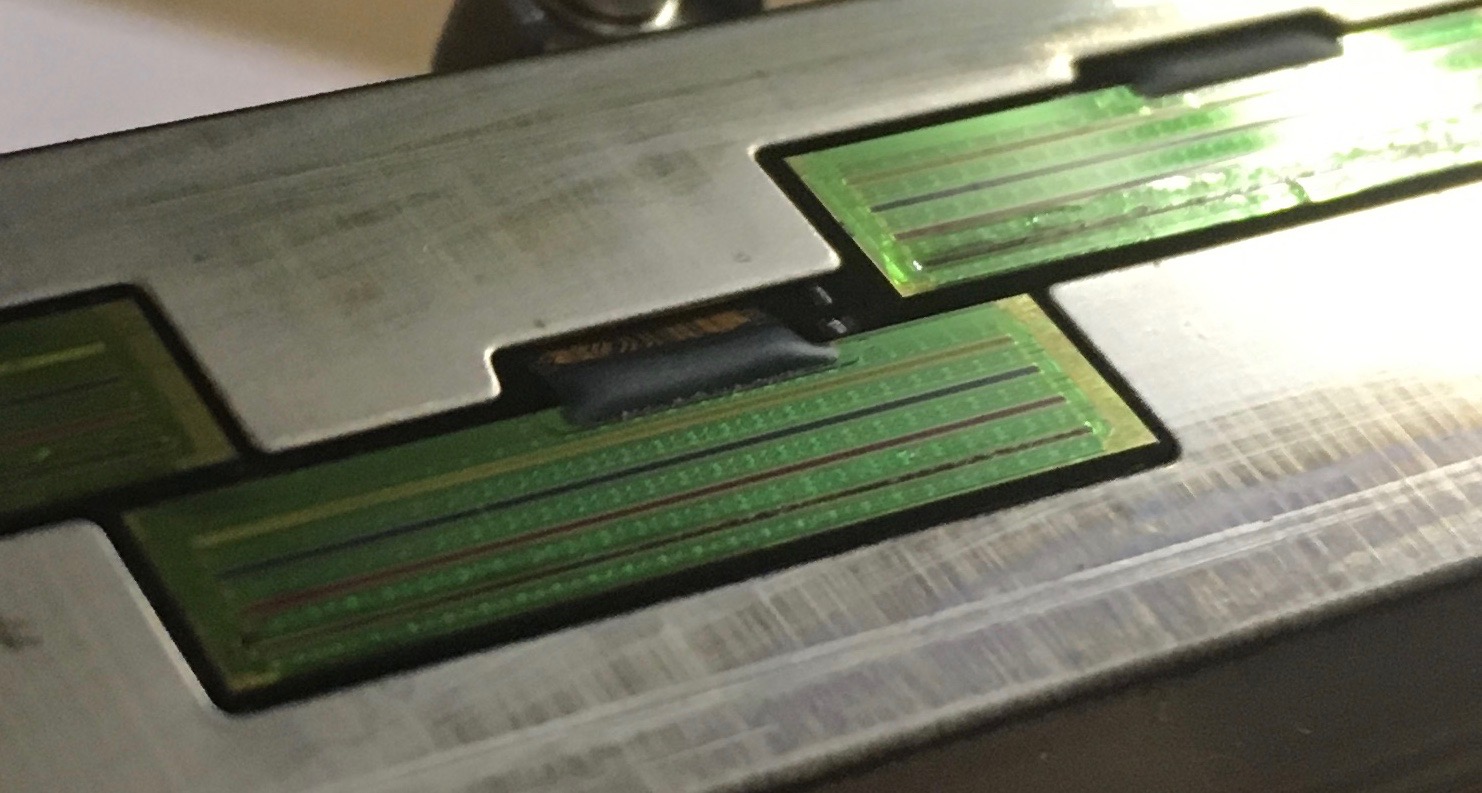 Print Head Close-Up Shot – notice the small amount of overlap between the heads. 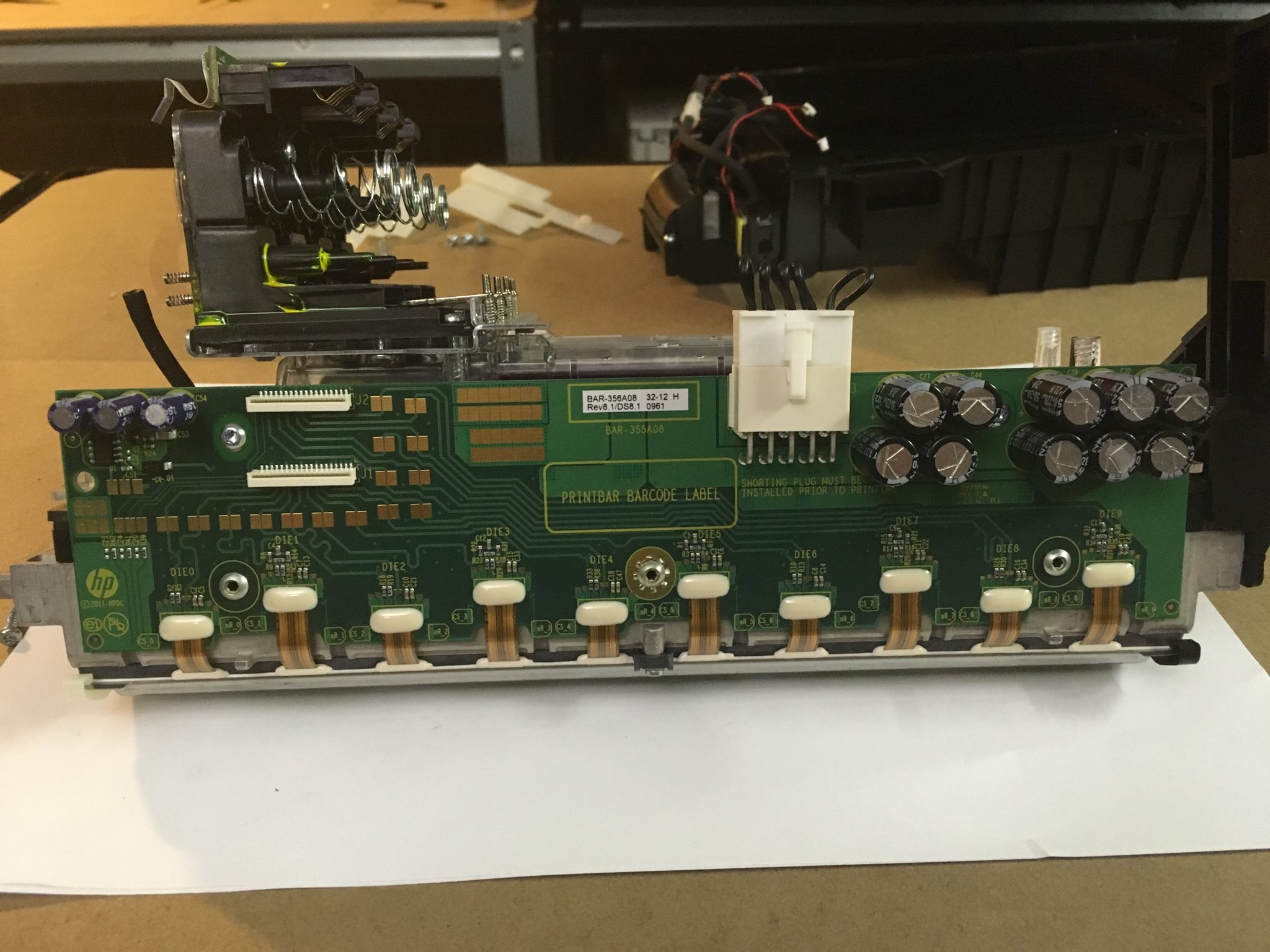 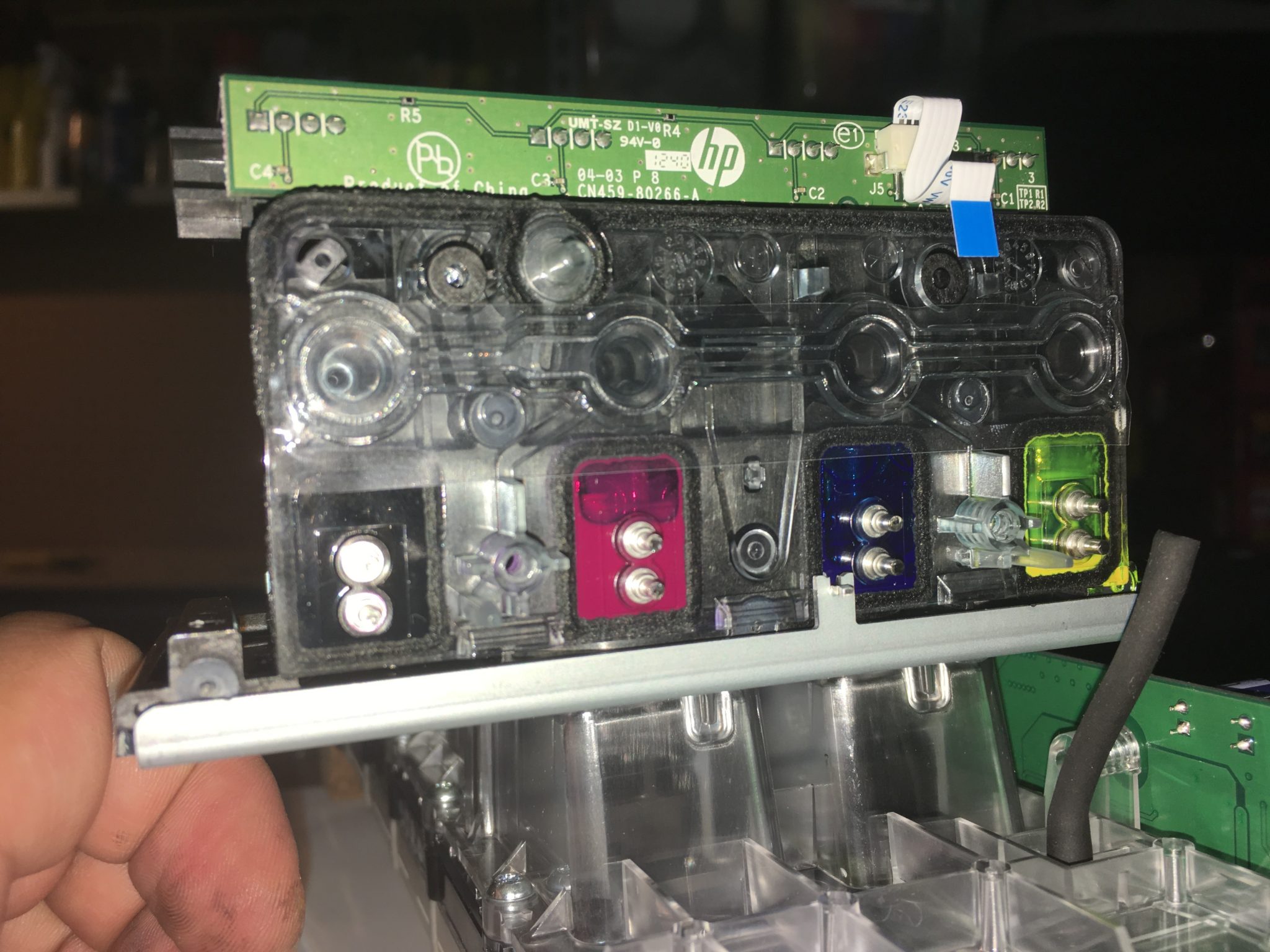 Notice the two metal pegs sticking out of the mini-reservoir fed by the ink cartridges. 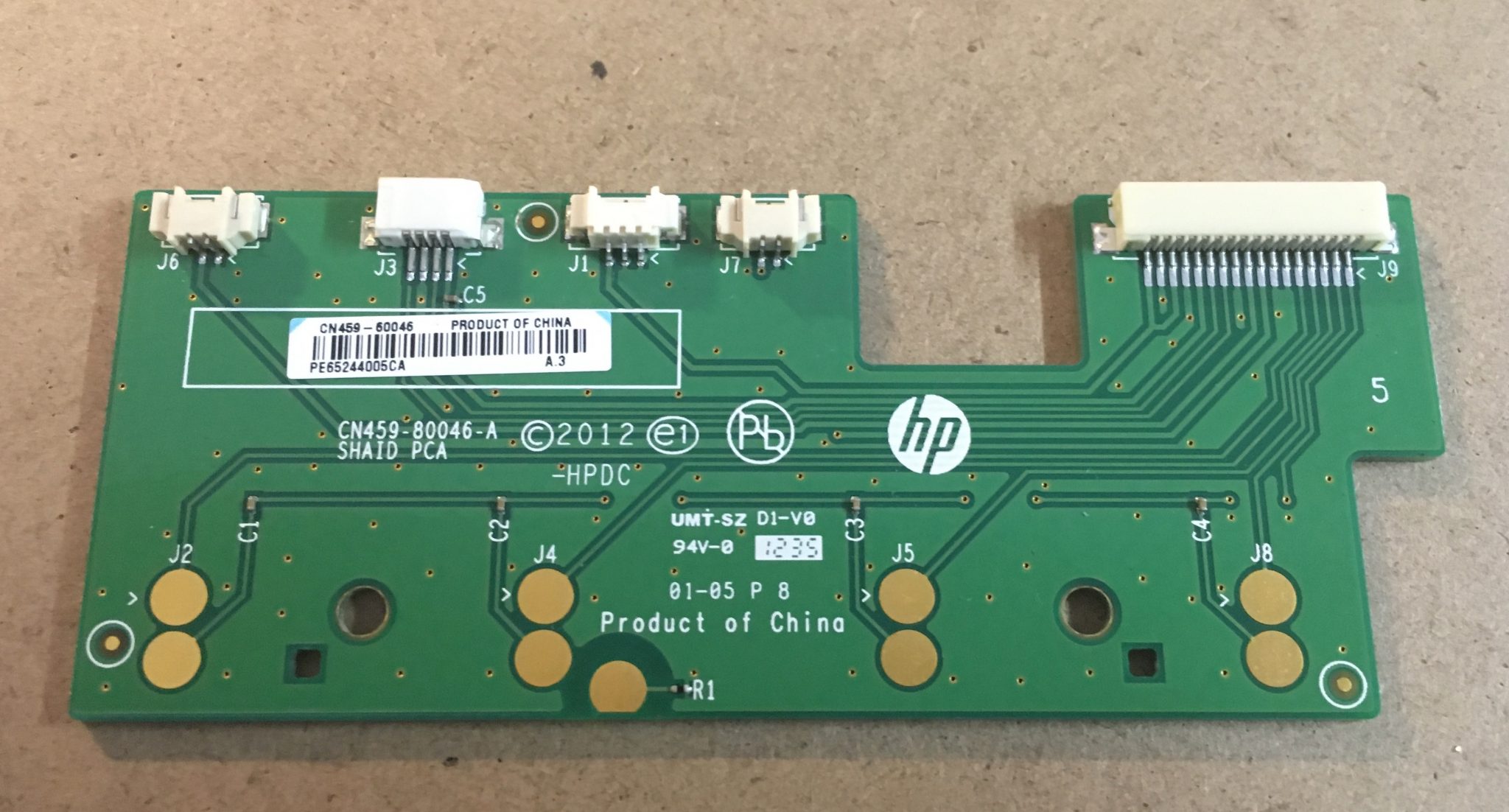 Notice the gold contact pads – small springs bridged the gap between this board and the pins in the shot above, allowing the printer to know when the printer is properly primed.

I have seen a range of faults, and have tried swapping flex-cables, printbars and cartridges between different printers to see what worked.