When you think Bosch, what do you think? For me, Bosch was always a boring name — the name emblasoned on our dishwasher while I was growing up. Hardly exciting or ground-breaking. Over time however, Bosch has entered new markets and categories, and today ‘boring’ is far from how I would describe them. A major player in the the self-driving car ecosystem, automation, a frontier company in advanced sensing and IoT technologies, and an established player in the SOFC (fuel cell) industry — Bosch, like Siemens and other major German engineering and technology firms, is certainly moving forward in many ways. So I was certainly surprised to see them on … Indigogo?

Crowd-funding? Really? A firm with almost half-a-million employees and over 70 billion euros in annual revenue?

The product they are trying to launch is the Bosch FreshUp, a small phone-sized device, that you can wave over your clothes to magically remove odours. This device promises to “Remove unpleasant odours instantly from garments without added chemicals thanks to innovative Bosch Plasma Technology“.

Wow, it sounds amazing, sign me up! … hold on a sec, friend. What about safety? 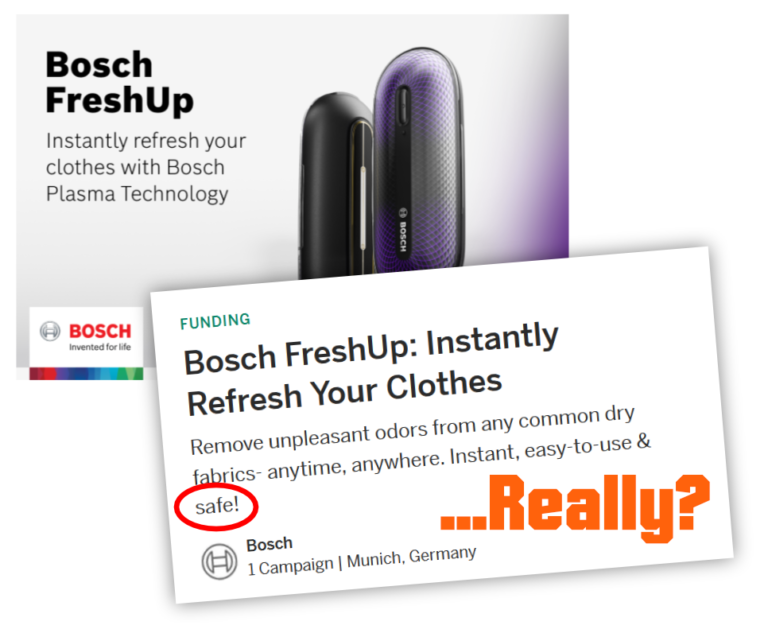 If you’re like most people, the word “plasma” probably is harder for you to describe and define than “nanoparticles” or “blockchain”. Here’s a 101 primer:

Plasma is another state of matter — like solid, liquid, and gas, plasma is the fourth kind of matter, and for sure, it is the one we know the least about. Whereas the other states all involve simply heating up or cooling down atoms, and making the electrons move faster or slower, with a plasma some of their outer electrons have been excited so much that they have been stripped away from their parent atoms. This create charged atom particles — which we call ions. Plasma could reasonably be described simply as a “gas, but full of ions“.

So how does plasma work to clean clothes?

First, lets talk about odours. Simplified, odour molecules are often fairly reactive, fairly ‘spicy’ molecules with hotspots or specific areas on them that are rich in charge. This makes them a little more keen to react with other molecules, in comparison to other more stable molecules that make up our air, like oxygen (O2) and Nitrogen (N2) gases. Now, if we take a molecule, and we give it a high enough amount of energy, we can actually break apart some of the bonds in the molecule. This can cause the molecule to split into two parts, or, may cause it to recombine in a different way that is not as reactive. We can use this kind of technique to break down or neutralise odour molecules into other (hopefully non-smelly) species — and in turn, potentially sparing us from being that office embarrassment.

Great, you say! Why don’t we just run washing machines with plasma instead of washing clothes with detergent? Why not have plasma spray air fresheners? We can make plasma from air, all we need is electricity, and then we would have no need for adding chemicals to wash our clothes or deodoriser our homes!

Well, this technique has already been around in a very similar form, in the form of Ozone generators, which produce ozone gas (O3). If you haven’t heard of Ozone before, it is very, very reactive special kind of oxygen-based molecule, that can also react with odour molecules to break them down, in a similar same sort of way. Ozone generators are often used commercially for deodorising homes and cars, often for effectively removing cigarette smoke odours. You’ve probably actually smelled ozone before, you might recognise it as that strange electrical smell you might notice after you run high-power motors in your home, like food blenders or fans. Ozone has an extremely potent smell, and we humans can detect it in minute quantities — some people can smell it even when diluted down to 1 ozone molecule in 10 million other gas molecules. The problem with Ozone is part of its inherent nature, being a ‘super spicy’ molecule, it likes to react with all kinds of things — including attacking the sensitive linings of our lungs and airways causing inflammation and weakening our immune defenses. Ozone exposure triggers a broad range of negative responses by our bodies, as it tries to try to defend itself from this aerial aerosol assault! When using an ozone generators to deodorise a space, for safety typically you have to completely evacuate a space until the treatment is completed, and the air has been ventilated.

The problem with Plasma deodorisation

Here’s the problem with Plasma: when we generate plasma, we will almost always produce Ozone as a by-product. This is not the end of the world, the concentration of ozone can be monitored by a device, and simply controlled to make sure that ozone (and other undesirable byproducts, like NOx) are kept within safe limits. It is simply not true that producing cold atmospheric plasma is “100% worry-free” as Bosch claim, or that it is 100% safe. As with many technologies, there are often risks and caveats that need to be considered to operate things safely, and making such absolute outright claims without even disclosing the risks, is something I will not overlook.

A cool gadget yes, and for sure, using it outside in well ventilated spaces would probably be fine. But using it indoors for minutes at a time? Bosch need to be far more transparent with us about any risks and hazards.

For more info on plasma generation for deodorisation, I recommend checking out TerraPlasma, they have a good page on this technology, where they mention the need to ensure “the concentration of produced trace gases such as O3 [ozone], NO or NO2 must be below the statutory legal limits.”.

The USA EPA also weighs in on ozone generators, highlighting the same concerns about even very low (0.1ppm) concentrations.

On their campaign, Bosch claim “the smell is harmless and quickly fades away“. I would challenge that statement, and I call on Bosch to provide more information and specific numbers about the O3, NO and NO2 emissions of the Bosch FreshUp product. Saying it has a “special plasma smell” is quite different from disclosing it potentially emits a “lung-burning gas”! 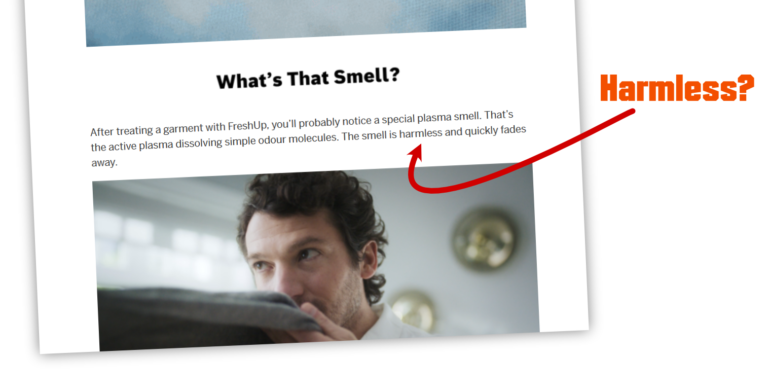 You can check out the Bosch FreshUp product page on Indigogo. I will not link to it as I cannot recommend the product without further information on its safety.

Some users have enquired about the ozone emission on the kickstarter campaign. Bosch again dismisses the concerns without stating the claimed emitted concentration, and by stating that the levels emitted by the Bosch FreshUp are “harmless” for humans. In reality, no level of ozone is harmless for humans!! 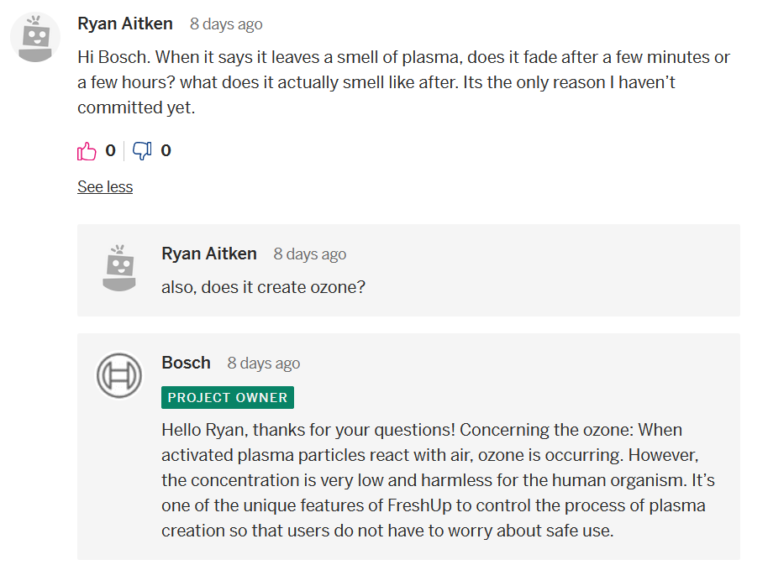