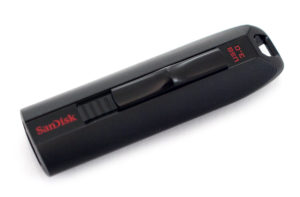 The Sandisk CZ80 is one of the fastest USB 3.0 drives currently available, at a reasonable price. It comes in capacities up to 64GB, and is so speedy it approaches SSD-like speeds, and is even recommended by some as suitable as a boot drive! However, while the case is reasonably sturdy, and the capless design handy, the retraction mechanism is frankly terrible. When you try to insert the usb into a computer, after using this USB for a few weeks, the internal usb seems to “slip” and will retract as you push it into the socket! This is very frustrating, so I though this could be a fun project to try and design a BETTER 3D printed solution.

I initially started out making a 2-part case in solidworks, which works well enough. My thoughts were to use hot glue or superglue to hold the case shut, as PLA is too brittle to have small clips like the OEM design. Instead, I designed in pegs to align the two halves while the glue would dry. Due to the orientation of the printed layers, these pegs do not have much strength, they are simply there to align while something else is used to join the halves. 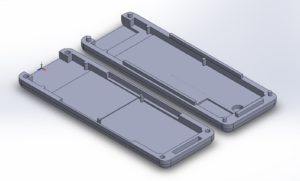 I further developed this case by adding a ring at the end for attaching to a keychain. 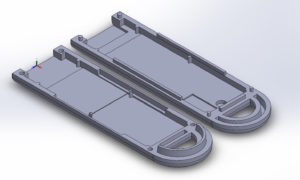 I then had a better idea: what if I could completely encapsulate the USB in one go? I combined the two halves I had designed, and then set the 3D print slicer (I use Cura) to put in a pause at 5mm high. When this height is reached during printing, the printer stops the print, and the head moves out of the way automatically. I simply placed the USB inside at this point, and then chose to resume the print. 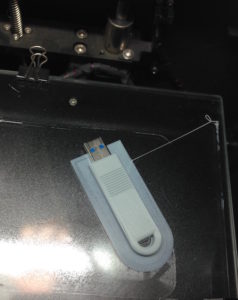 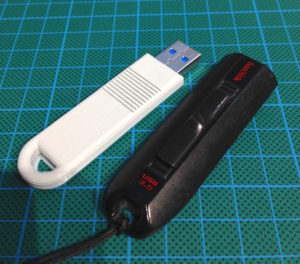 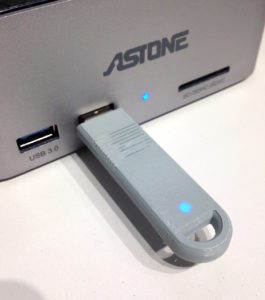 The results speak for themselves!

There is a slightly noticeable seam on the side of the case, as I accidentally pressed down on the bed without realising that the steppers had disengaged. I am confident that if I was to redo this more carefully, that seam would be minimised.

This was really only a preliminary test using a 16GB drive I had lying around. I’d like to buy a 64GB drive and redo this with a carbon fibre or nylon filament for maximum strength… to be continued!

I’ve uploaded all of the files I created in this project to thingiverse here. I would love to hear if this helps someone out! 🙂