I’ll be updating this page with new info as I get time.
If you have of these printers I would be really interested to hear your experiences too!

In March 2015 I bought a JG Aurora Z603s 3D printer (also listed as Z-603S), and I thought I would write some content to introduce this great printer to the English speaking world, telling you why it is precisely at the sweet spot of value for money, and why you should probably buy one [EDIT: Have a read through, and then see the update 26/9/15 at the end of this article. TLDR; I no longer recommend this printer]. It was a major risk to buy one, as I couldn’t find a single review on the web! As it turns out, overall, I was pretty lucky. 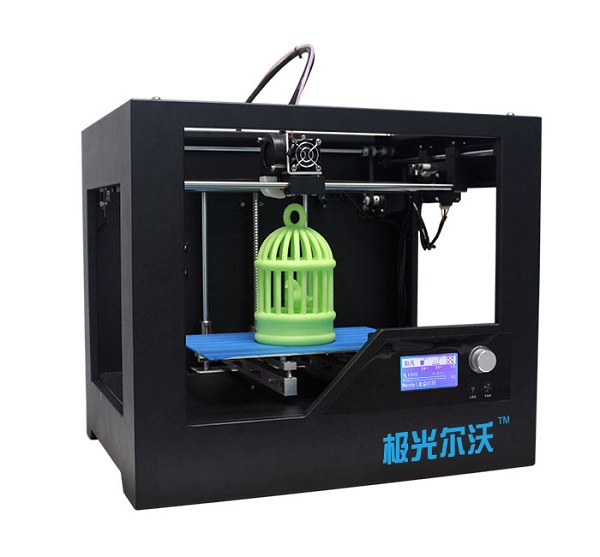 My thoughts before buying…

When I started looking for my next 3D printer I first checked out some of the lists for other recommended models. I had expected by now, that some cheaply produced chinese printer would be dominating the market, but was surprised that this was not the case. (at the time it was 2015 you see, and the Ender 3 did not exist yet…) The flashforge creator pro would probably be the closest to this, but coming from a prusa, the very small bed size put me off. Dual extruder support is also a temporary gimmick in my opinion – the diamond hotend is where things will be heading in the future. The flash forge starts at about $1500AU, delivered to my door. At that price, I was considering the delta printers, but I think unless you enjoy calibration hell, give those ones a year or two before the cost comes down and the quirks are all sorted out. So, what was I to do? I visited a local who had a low-cost Davinci, but the low quality of the prints and small non-heated bed size put me right off.

I started to search for lesser-known printers. From what I observed from the 3D hubs list, an enclosed metal frame was key for achieving consistent, precise, fast prints. I wanted a 180×180 bed minimum size, and a cost of under $1500 AU. I searched many of the chinese/hong-kong sites, like dealextreme, geekbuying, gearbest, tinydeal, dealsmachine, aliexpress, and of course, eBay. I tried to find out the history behind each printer. A couple of the kickstarter printers had gone off to be excellent, while others turned out to be relative duds. I was happy not to be an early adopter for once 🙂

The Z603 3D printer stood out like a sore thumb – nothing at all like the Z603 exists with its solid folded sheet metal and welded frame. Initially I couldn’t find any reliable info or reviews on it, but it looked interesting. My early google searching turned up very little info, as I did not know the brand name, and the Z603S printer seemed like a variant that, judging by its more limited availability, had just launched as a minor update – probably early this year. I figured it would be interesting, and if worst came to worst, I could use the metal frame and motors, and replace the electronics with my own equipment scavenged from my old prusa (RIP). I took the plunge and ordered from geekbuying.com. I found a 5% coupon, which took off close to $50 bucks, which took the price down to under $1300AU!  Communication and shipping was a bit slow for a few weeks after ordering, but I called up geekbuying (they have people who speak english!), and eventually it was sent off using DHL and arrived less than a week later after calling them up.

The all-metal construction is excellent, and the precision of the moving components is great, with GT2 belts, sensible 0.4mm nozzle, 1.75mm filament, and proper leadscrew for the z-axis, none of that “threaded rod” nonsense I had on my Prusa Mendel. For the price I paid (under $1300 AU at my door, and customs didn’t fleece me even for a holey-dollar which was strange for a change!) it is really excellent. I have to wonder if it competes with some of the other dual extruder printers on ebay, but the very solid welded metal construction of this printer makes a significant difference in printing quality, and a WORLD of difference compared to the wobbly-as-jelly-prusa I used to have. The motor drivers are NOT going to skip steps, and provide plenty of oomph to make the printer whizz precisely, while at a decent rate.

I am really happy with the print quality I get out of this printer. 0.1mm/0.2mm layers are trivially easy, but I have done 0.05mm layers easily too. Check out my print hub for photos of things as I print them.

The printer has no english documentation. Google translate or bust. (EDIT: 5/10/15 – talking to the manufacturer they claim it does come with english documentation, but the supplier might have forgotten to include it). Thankfully, it behaves just like any reprap, and works fine with Cura, ReplicatorG, or Pronterface. The motherboard (Aurora Erwo) is a custom board – and there is no documentation, or info on spare parts anywhere that I could find. I’ll talk about this later on. The nozzle also doesn’t look easily replaceable, so I’m hoping that it holds up ok. (EDIT: 5/10/15 the nozzle is solid metal which is good, but required taking apart the entire hotend/extruder head to be able to clean it.

The biggest issue I had with the Z603S was with the heated bed – it’s just not flat. The bed is made of 5mm, black, anodised aluminium, which looks fantastic. However, mine was out a good 0.3mm full deflection, which as you might imagine, caused major issues when trying to level the bed for printing! I would have tried to bend it, but the warp is like a bowl, with a dip in the middle of the plate. I contacted geekbuying, and was told that this was “within spec” by their engineer… sure, 0.3mm bend is fine on a 0.1mm layer printer… really funny guys! But alas, when you buy direct from China, you don’t expect any warranty service…

The solution I currently use is to put a flat sheet of 3mm glass I had cut at minimal cost at my local glazier’s, which has not only given me a perfectly flat surface, but also, glass is an excellent surface for 3D printing. No need for abs juice/kapton tape/blue painters tape – PLA seems to stick really well on cleaned (I use metho) glass surfaces, and it gives a nice surface finish to the base of the print.

The printer works well out of the box, but I found that it would freeze up after about 15 hours or so, when printing on very high resolution and very large parts – which was naturally, very, very frustrating! All the prints (even with slightly tweaked designs) failed at the same point in the print, so after validating that the G-Code was ok, I was confident that it was a printer firmware problem. The printer is shipped with a marlin firmware (hooray!) that reports back to be v1.0.0, and marlin 1.0.3 is currently in development over at the marlin website, so I thought I would try and see if a firmware update was available.

A bit of google searching later, now equipped with the brand name and more information, I found their home pages (old, and new)  – almost all in Chinese (thanks Google Translate…). Since then it looks like Aurora finally have a basic english website here, and an english variant of their main website here. I tried contacting numerous international phone numbers over Skype, and I managed to get in touch with them. I set about asking for the firmware source code, but they were not happy about complying with the GPL, stating “company policy” as a reason not to provide their modified source code – I figured that trying to twist their arm was pointless, it definitely wouldn’t be the first time a Chinese company has disrespected the rules of GPL. Instead, I gave up an entire weekend, broke out the continuity tester (the only good feature on my cheaper multimeter – the Excel XL830), and managed to pin-out the entire device, and, successfully upload my own working Marlin firmware!

If you have the Z603S printer and are having similar issues, or just want to try the latest marlin firmware – let me know, and I can provide you with a custom firmware – GPL source included :-). For the time it took to get this going (many, many hours…), if this helps you out, hitting the chai latte button on the side is always appreciated and very encouraging that I’m not the only one interested in  tweaking these interesting printers!

A long story short, a wire broke at a motor connector while printing, and this break killed one of the 4 motor drivers. Since these are soldered on, a complete motherboard replacement is necessary!! The yellow goop in the photo came from the factory to hold the cables in place firmly. 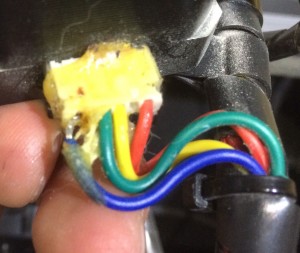 This is especially unfortunate for this printer, as this is a custom motherboard and the quote from the manufacturer for a replacement motherboard was $160USD posted.

I would strongly caution about using motherboards with non-replacable motor drivers in ANY 3D printer. Wires in the moving parts will inevitably fail over time, it is unavoidable. This is the second time I have had a motor wire fail, but last time didn’t kill the driver – this time I’ve clearly been unlucky. The non-replacable driver design is just a (costly) ticking time-bomb.

The wires used on the printer seem to be of cheap quality too, the sleeving is stiff and a bit brittle, and the wire appears to be fairly thin gauge (20AWG) aluminium not copper. The wiring design and spiral sleeving is also very time consuming to remove from the frame and reroute once repaired.

While I may attempt to repair this board down the track, at this stage I am going to switch to the RUMBA motherboard that allows for easy driver replacement, as I don’t want to have to deal with the kind of inconvenience this failure has caused ever again!

The drivers used are very nice Sanyo drivers, they have the capability to do micro stepping up to 1/128, but the ATMEL MEGA2560 does not have enough processing power to do more than 1/32 stepping, but at least 1/32 is still OK. I am looking into using RAPS128 poloulu-style REPLACABLE drivers as these have the same motor drivers as this printer, using a RUMBA motherboard with RepRapDiscount Graphic Controller until I can find the time to make a custom cable for the unique Z603-S display panel.

I’m now several months into using this printer, and I am convinced that a very sturdy frame, and a welded one no less, is valuable in providing accurate and precise 3D prints. I am slightly disappointed with the rigidity of the bed attaching to the the Z-axis, there is a fair bit of slop in the x and y directions there but as the prints are generally great I’m going to say its not a major issue.

I no longer recommend buying this printer.

To be fair, the printer has some significant strengths:

Aurora have since released a new printer model the A-8 (see here and here), and while it is more expensive, it at least appears to have better cable management using cable snakes, but I have not seen it and cannot comment on whether any of the major issues in this printer (like difficult repairability) have been fixed. Without any reviews available on the internet, you buy it at your risk as I did for this one. 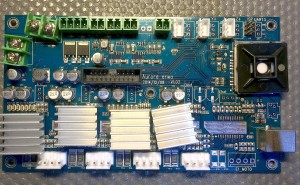 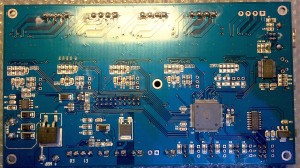 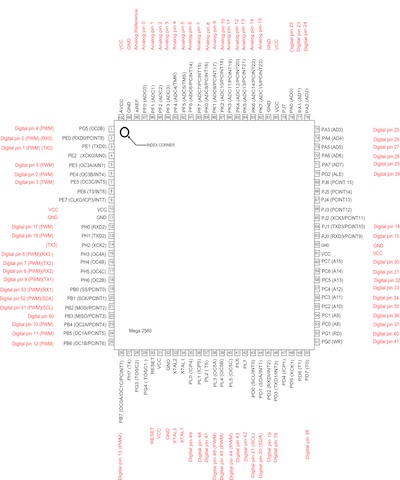