So what exactly is Kailo? What is Kailo made of? Before we go into what I found out through my own investigation and testing of the product, what does Kailo’s designers claim it to be?

On their website FAQ page, Kailo is claimed to be…

While Kailo claims the product is patented, the patent that the company owns has nothing to do with pain relief, it is actually about printable flexible antenna technology. When we look at that patent, the product described has a lot of similarities with Kailo:

For many people, some of these terms may seem foreign, but actually, it is quite simple. A substrate is a surface that something else is placed onto. When you write with a pencil on paper, the paper is the substrate, and you are simply coating the surface of paper with graphite particles that are rubbed off from the pencil tip. In the case of Kailo, the substrate is just a flexible plastic sheet – in this case they tell us that Kailo is on a “Polyester Substrate”, most likely a common polyethylene terephthalate (PET) film, which is non-conductive. The plastic sheet is then coated with particles, before being coated again with a “dielectric coating”, which appears to be another thin plastic coating, perhaps a flexible poly-vinyl-chloride (PVC) coating like Plastisol.

From the main patent we learn more details about those conductive particles:

Interesting stuff! Judging by the colour of Kailo, it would be reasonable to guess that copper to be found in the conductive particles used in Kailo.

I placed the entire patch inside an scanning electron microscope (SEM) which allows me to examine Kailo under extremely high magnifications. Here’s a close up of the surface below… 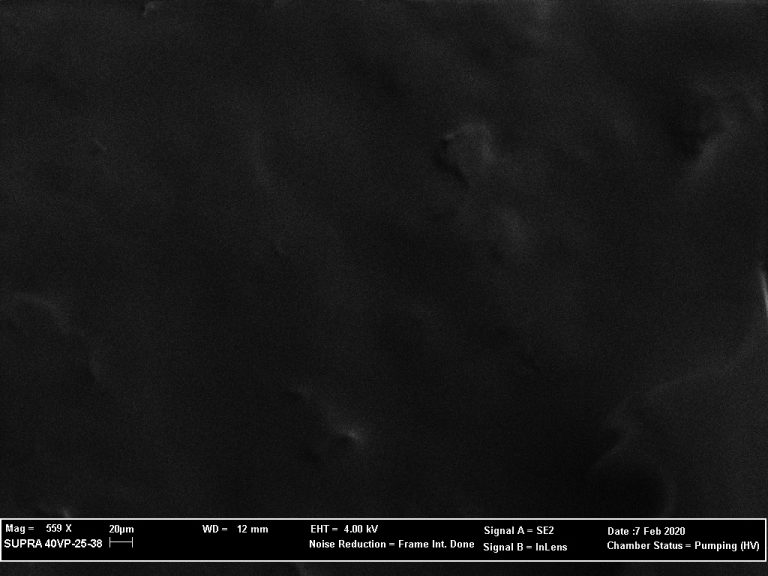 …pretty boring! Now, I don’t care too much about looking at the surface, as I was more interested in finding out what Kailo is made of.

Fortunately, we don’t really need to guess – with the right equipment, we can find out for ourselves. I took the Kailo patch, and I lightly scratched one of the geometric pattern regions, to try to cut through some of the plastic top coating, to expose some of the internal conductive layer. 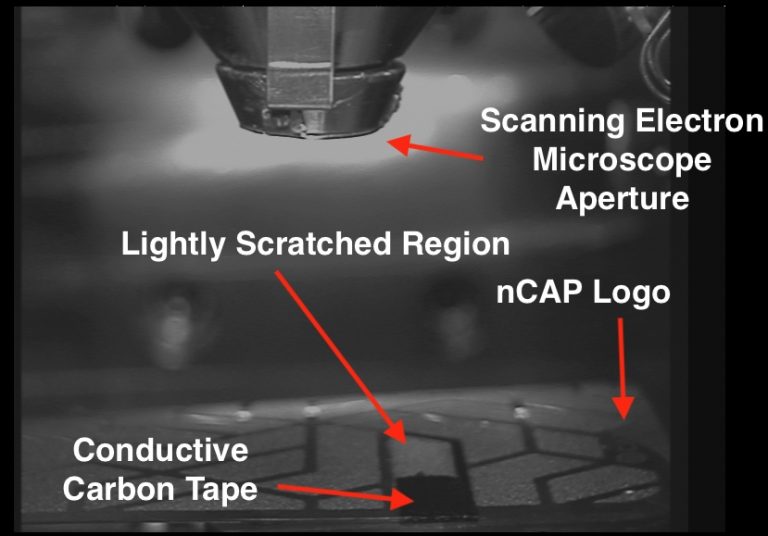 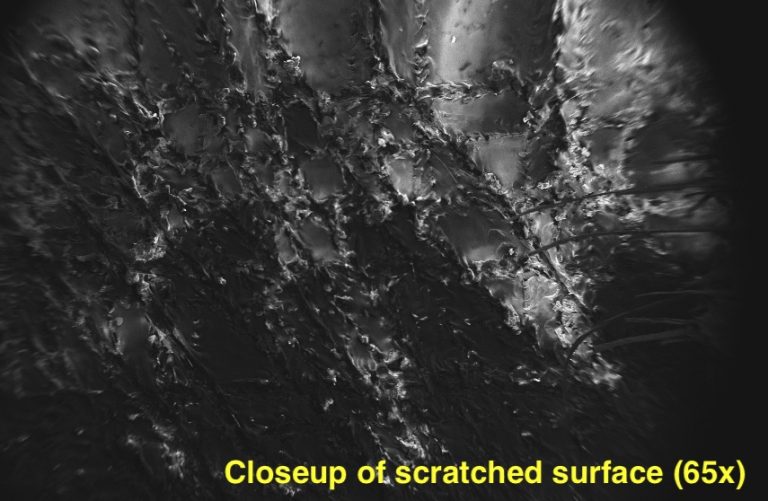 By lightly scratching through the plastic top layer, I was hoping to expose at least some of the active inner material.

The SEM I used is also fitted with an energy dispersive x-ray (EDX) sensor, which allows the composition of the sample to be analysed semi-quantitatively. This technique is a good starting point for accurately identifying which elements are in a substance. It does not detect all elements, but it is generally good at identifying most metal atoms. Since Kailo supposedly interacts with the body’s electrical system, it’s a safe bet that it would need to contain some metal. 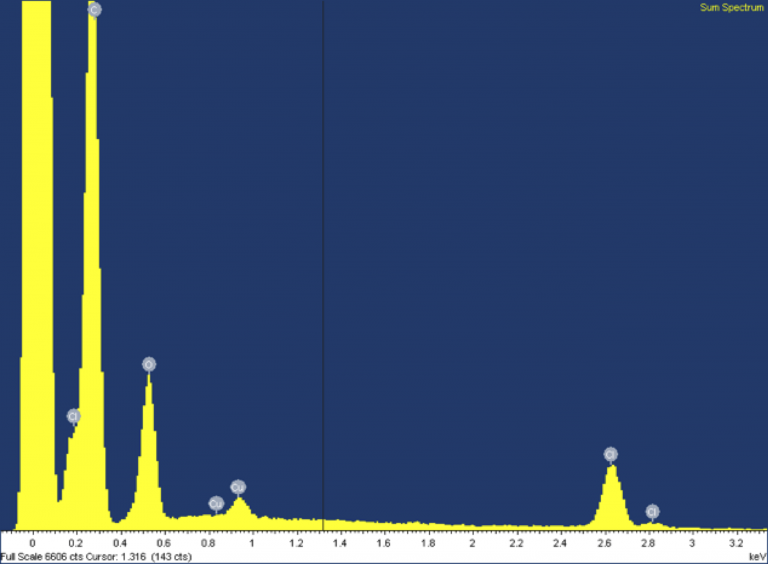 While the image above is perhaps a little hard to read, the take away is simple – Kailo contains primarily Carbon, Oxygen, Copper and Chlorine. Now, most of these elements are found in PVC plastic, which would make sense. The presence of Copper is also unsurprising, and matches what we expected previously. By zooming in under higher magnification, I was able to find regions within the scratched sheet that were mostly copper.

As for nano-scale? At least the particles that I found, many were far bigger than mere nanometers in size. Here’s one particle that’s quite a few microns across, that’s almost all copper. 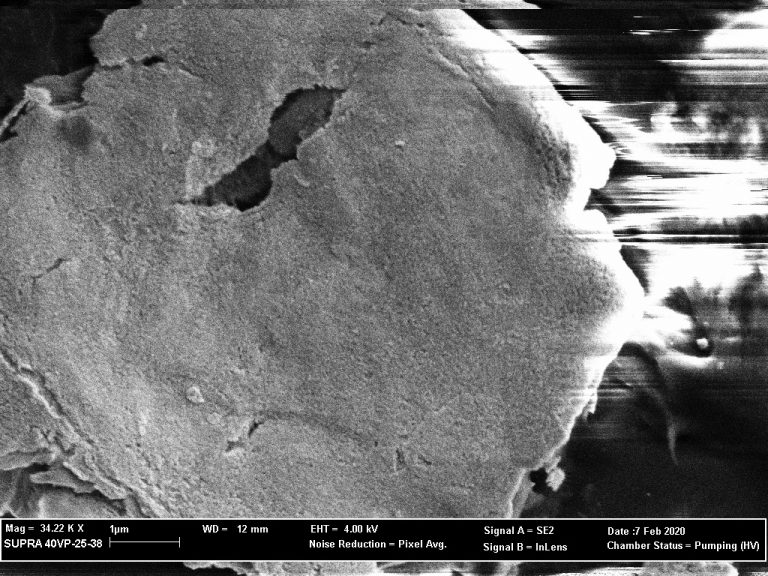 The lightly scratched sample surface is far from ideal for closely examining the particles embedded in Kailo, and I did not want to permanently damage the product through more destructive tests. From the results I was able to find, I am satisfied that Kailo is essentially copper particles mixed with a binder, and then printed onto a polyester sheet, before a PVC protective top coating was applied. A significant amount of carbon was also detected, but it was hard to determine whether this was from the carbon in the plastic polymer films, or whether carbon-black particles were also added into the particle mixture. It is certainly safe to say that the copper colour of Kailo appears to simply come from … well, copper particles.

So, from what we learned, can we make our own DIY Kailo with some copper foil and a home laminator? Almost. The patent talks about dispersing the conductive particles so that they don’t touch each other, but that’s the only significant difference.

Yes, I’m being facetious, but it’s not far off…

This article was sponsored by … no-one! I’m a materials engineer in my real job, and I performed this work on my own time, for my own interest, and to satisfy my own curiosity. However, I do think this is more than a little ironic, as the Kailo founder, Stuart Fetzer, is apparently also a materials engineering graduate.

Update 6th March: I returned my Kailo to Amazon, and fortunately I have received a refund from the company.

Thank you for joining me, but this the end of the ride for me with Kailo. I will be moving on to new projects from here. Feel free to email me your comments and thoughts on this Kailo series – it has been encouraging to me that my efforts have made at least some difference. Between myself and the hundreds of comments and messages I have received about Kailo from you guys, we have discussed this topic to a level far beyond what I had hoped for!

For those of you still suffering with chronic pain – you have my deepest sympathy. As someone who has friends and family that suffer from persistent pain, lets hope that new and innovative treatments continue to be developed, and that they will be put to the test to prove that they are effective beyond placebo.